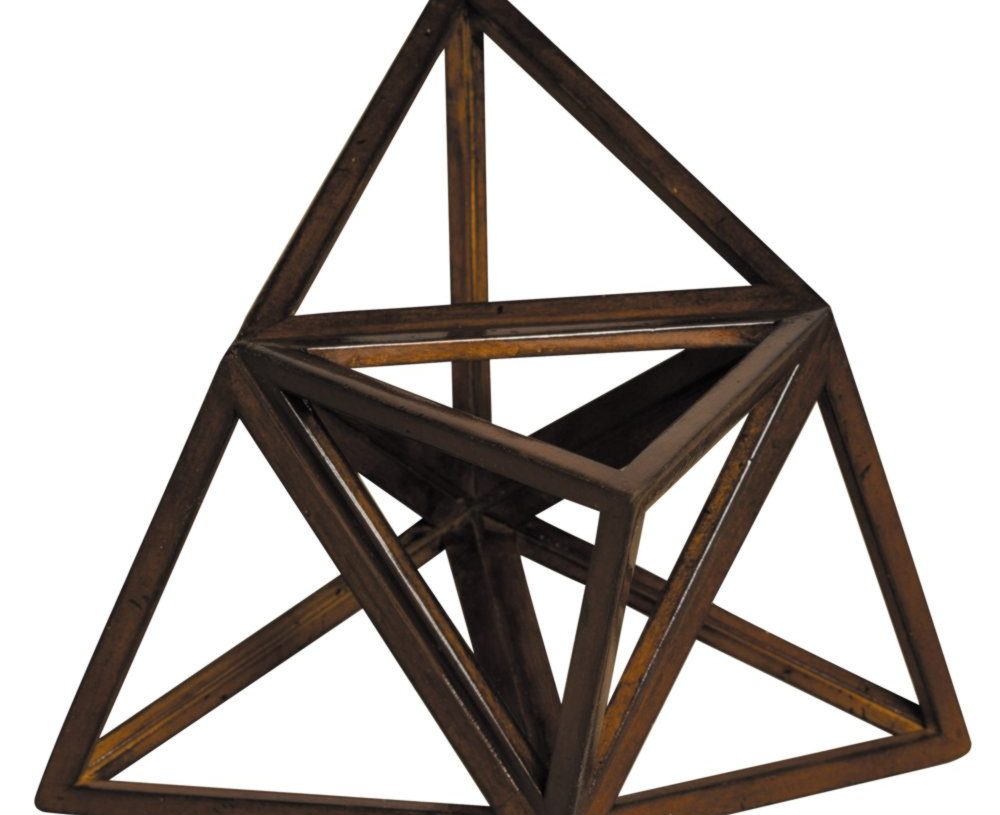 I am tetrahedron. I have many facets. Four to be exact…
So you’re a four sided shape?
There are four sides…internally. And another four externally, of course. To achieve that I have six edges and four vertices, which makes me a three-dimensional object with a vertex configuration {3, 3, 3} so I have all the symmetry elements required to be a member of the tetrahedral symmetry group.
Are you real?
Tetrahedron exists in a realm of geometric space not normally perceived by humans. For obvious reasons communication is by means other than social.
Are there others like you?
Tetrahedron is a Fellow of the Society of Four-sided Objects, so there must be.
Are you the only pyramid?
No. But there are a few members who are indeed not pyramidal. Several open-ended objects, for instance.
Do you have a front and a back? Or top and bottom?
Obviously, being a regular three-dimensional object, it doesn’t matter which way up I am.
So, how do you see, for instance?
I can see from any of my four faces. This of course, gives me a unique perspective on things.
Do all your faces look the same? Are they the same colour?
My faces phase, as it were, into different colours, depending on my position relative to any electromagnetic radiation that should happen to be present.
You must be very beautiful?
Ah yes, if only you could see me…
How big are you, exactly?
Exactly, I’m not sure. It’s difficult to compare yourself to anything when your existence is somewhat tenuous. But I would say that I am not overly large. Quite small in fact.
If you’re that tenuous, does gravity have any effect on you?
I don’t have any need to be at rest on any surface, if that’s what you mean.
So, does that mean you can fly?
Perhaps fly is the wrong word. I tend to float about a lot, that’s for sure.
Where do you live?
I have no specific place of rest, though I tend to frequent certain areas within space-time which are familiar to me.
How do you type?
I roll around the keyboard. This is where being pointy has its advantages.
So you must be quite small then?
Yes, if by small you mean small enough to roll around on a keyboard.

So, what can you do with a tetrahedron, you may ask?

You can elongate tetrahedron, stretching me (a bit of a strain though).
You can stand me on edge or balance me on a vertex (or point, as prefer to call it).
You can join two tetrahedra together to form a tetrahemihexahedron (mmm must try that!).Tetrahedron can join with another this way too, forming a stella octangula, really a stellation of an octahedron (in fact, the only stellation). The tetrahedron is the only simple polyhedron with no polyhedron diagonals and it cannot be stellated, which is a bit annoying as I’ve heard it’s good exercise.

You can stack a few of my colleagues to form a tetrix.
You can slice tetrahedron so I’m truncated (though this would be rather cruel).
Open me out. Look I’m sunbathing!
You can squeeze tetrahedron for a hyperbolic version of my usual Euclidean self. I’d get rather puffed out though.
A number of compound tetrahedrons can be constructed by rotating tetrahedron about the centre of each face. Feel a bit dizzy.
You can stick an even number of tetrahedrons together to form a ring. The centre of the ring wiggles in or out showing different sides (sounds like a party!).
Inflated tetrahedron to form curved edges (I’d be inflate-a-hedron or tetraflate).
You can divide me into two trapezoid thingies (ouch!).
The tetrahedral way
A polyhedron is a three-dimensional figure bound by polygons. A polygon is a two-dimensional shape bound by straight lines. It is said to be regular if the edges are of equal length and meet at equal angles.
The simplest regular polygon is the triangle, therefore the simplest possible regular polyhedron is – you’ve guessed it – me!
You might consider the tetrahedron a humble polyhedron. Only four points in space mark the corners of four triangles. The triangles in turn are the faces of a tetrahedron. It’s the simplest of all solids. If each face is an equilateral triangle, the result is a regular tetrahedron.
This is a good diagram of a tetrahedron. You can see my four faces, four vertices and six edges that puts me in a special group called Td. I’m the prototype of the tetrahedral group, of course.
There are only five regular polyhedrons known collectively as the Platonic Solids. Of course, some of my closest friends are in this little select group. Let me see, there’s Cube or Hexahedron as they sometimes prefer. Then there’s Octahedron, Dodecahedron & Icosahedron who always hang around together. I’m a loner myself…

The tetrahedrite series
Much to my delight, I have discovered that there is a group of minerals that have a similar profile to my own; geometrically speaking of course. The general formula for this group is A12X4B13 and substitution is widespread, forming an extensive solid solution series. The ‘A’ can be silver, copper, zinc, mercury or iron, the ‘X’ can be arsenic, tellurium or antimony and the ‘B’ can be sulphur, selenium or tellurium. The most common of these is tetrahedrite – copper antimony sulphide or Cu12Sb4S13.

Tetrahedrite forms a solid solution series with the rather rare mineral tennantite – copper arsenic sulphide. The two share the same crystal structure but they differ in the percentage of arsenic and antimony.

In case you hadn’t guessed, tetrahedrite is named for its common crystal form, the tetrahedron. Tetrahedrite forms interesting (rather like me) mineral specimens. The crystals are opaque and can be black through steel grey or silver with a metallic lustre. They have an average specific gravity for metallic minerals. Crystal habits of course include the tetrahedron but sometimes modified by the dodecahedron and tristetrahedron, giving the crystals multiple facets while still retaining the basic tetrahedral shape.

Twinning is occasionally seen, as are massive and granular habits. The crystals don’t cleave but they fracture conchoidally, that is leaving a curved dent, like glass. Unfortunately they are not very hard and they tarnish to a greenish shade. I’m glad that doesn’t happen to me. The multi-faceted tetrahedral crystals as well as the flat faced simple tetrahedral crystals can be very striking, naturally, just like me.

It is an ore of copper and a minor ore of silver as it can contain a small percentage of silver. Thankfully I’m not a minor ore for anything.
They can be found in Peru, Australia and Mexico and are associated with other minerals such as quartz, pyrite, galena, chalcopyrite and other sulphides. I must make a point of visiting these places…

A tetrahedral life
Recently, I found myself inside a cylindrical chamber. It was metallic and had many perforations. It had a glass door, which was promptly shut after some fabric had been stuffed inside. I decided it was an excellent opportunity to see what precisely occurs inside this machine; I had seen the white cuboid shake about violently many times before, but its true purpose was not clear to me.

Water began to rush in, and the cylinder proceeded to spin from side to side, tossing the fabric pieces about in the water. It was then that my vision was affected by a mass of foam quickly filling the cylinder. The foam was fragrant and I concluded that it was soap powder that was responsible. After much swishing and spinning in this foam the cylinder finally emptied its last load of water, rinsing away the remnants of foam.

For a while, the cylinder lay dormant, occasionally doing a slow turn. I realized that this was the end of the process, where the fabric is gently flipped in what is termed the ‘anticrease’. I wondered if this was some subatomic particle I hadn’t heard of since there is also a ‘crease’. They seem to annihilate each other inside this machine…

On another close encounter with water, tetrahedron has observed the human ritual of bathing and I have tried it for myself. I assumed that this was also for the purposes of washing. Of course, tetrahedron doesn’t require any washing but it appeared as though it might be a more pleasant experience than the white cuboid so I quickly dived in before the bather. There was some foam here but not nearly as much, though I did notice that my presence caused a strange rippling effect. I’m not sure if this is normal or if it was just me…

In the interests of science I threw myself into a glass full of this yellow substance and saw the rising bubbles forming a frothy off-white head which rapidly diminished. I closely examined this foam.

Unlike other foam, which seemed to me to be many semi-coalesced bubbles of different sizes, the champagne foam was mainly uniformly sized spherical bubbles of less than 0.1 millimetres in diameter, suspended in the fluid itself.

By viewing objects that were behind these, it was clear that they were acting as tiny lenses. Their spherical shape presumably diverge light because the gas they contained has a lower refractive index than the surrounding fluid. As a result, the light entering the surface of the foam scattered in different directions by multiple encounters with the bubbles. Reflections from the bubbles’ surfaces also contribute to this scattering, some of the light finding its way back to the surface. This must be why the foam looks off-white even though the fluid is yellow.

Underneath this disappearing layer I found isolated bubbles, still rising. Curiously they appeared to rise in an ordered fashion in a column from the bottom of the glass. I quickly left as the glass was about to be utilized and I was starting to feel a little light headed…