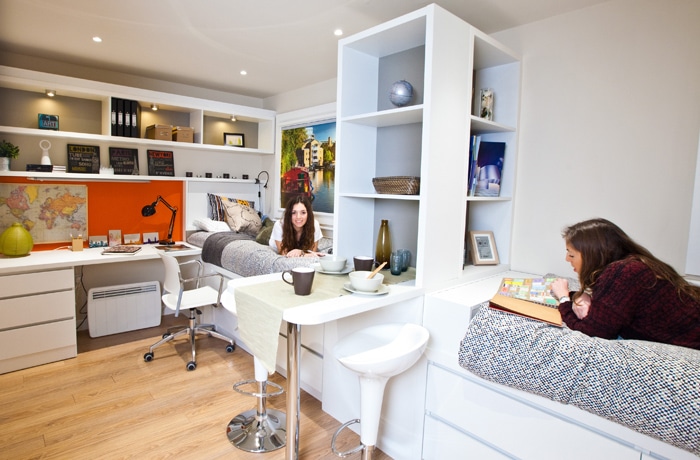 Abstract: We propose a new theory for the decay of student living standards and compare it with previous efforts in the field (namely, the theory of Linear Extinction). Our theoretical model, Serial Subtraction (SS), takes a new approach on the issue of standards’ degradation and appears successful in predicting most of the observed phenomena even in the vicinity of the human-to-animal crossover. A complete analysis of the principles of the theory is given for many components of student living, including clothes and dish washing, food preparation and flat maintenance.

I. Self-disorganised Criticality
Relaxation dynamics in student lifestyles has been a long standing problem in the field of self-disorganised criticality [1-3]. The main question that has concerned scientists for ages is the following. How can students regress to subhuman living standards yet avoid a catastrophic collapse by equilibrating around the minimum effort human-animal transition? That is to say, how does the system disorganise itself in such a manner as to sustain a subhuman existence up to the degree ceremony (and in many cases [4] even beyond that) without the living standards descending all the way to the pigsty singularity?

The main quantity of interest is the evolution of the degradation index, K, defined for any everyday process (such as cooking, washing clothes etc.) as the sum of the effort put in each individual component of the process:

where the sum runs over all n components and wi is the effort of the ith component, usually, a ridiculously complicated function of caloric consumption subject. For example, for a typical 4-dimensional activity such as the dish-washing process, the components would be soaking, scrubbing, drying and replacing-on-shelf, each component carrying an associated effort. It is often useful thinking of K as the magnitude of a vector K in n-dimensional effort-space (notice that higher values of K represent lower degradation degrees, a slightly misleading convention adopted by the pioneers of self-disorganised criticality and one which remains the norm to this day [5]).

So far, little understanding has been gained of the evolution of K throughout the relaxation process. The only theoretical attempt at tackling this puzzling issue, the Linear Extinction theory (LE) of Vindero et al [6], has been only partially successful, reproducing most of the decay patterns observed yet failing to account for a low-effort minimum at which the system appears to equilibrate. LE theory predicts that the efforts, and consequently K, go asymptotically to 0 (the pigsty singularity), in clear contradiction with empirical evidence which support a long-time freezing of K at a finite value Kc around the human-animal transition.

The structure of this paper has as follows. In the next chapter we introduce the general principles of both the LE and SS theories together with short discussion on their implications. In chapter III, we examine the predictions of SS in more detail and then conclude the paper with a summary of our main findings.

Let us now examine the principles of each of the two theories starting with LE using the paradigm of clean clothes’ procurement. In the whole discussion we will assume a male Drama student living alone with no loss of generality and 5-dimensional washing comprising of: (i) white/coloured clothes segregation (ii) washing (iii) hanging (iv) ironing (v) folding.

As mentioned briefly in the Introduction, LE assumes that the decay of the degradation index (again, this means a relaxation through successively more decadent states) proceeds through the linear decrease of the efforts [6],[7]. So, if a student initially spends 1 hour, say, on the ironing stage, he will begin to spend less and less time until w4 goes to zero in a finite time (and correspondingly for the rest of the n-1 components). Unfortunately, whilst this way of thinking does follow the decay closely for large K, for small K the predictions of the theory are much worse and, most importantly, the eventual fate of K is the collapse to the K=0, pigsty state. This means, that LE suggests that the student eventually stops washing clothes altogether.

SS, on the other hand, assumes that the change in the various efforts is negligent during the decay and that the latter is effectively achieved through the incremental subtraction of particular components. It is the basic premise of SS theory that a test student instead of spending less time in each stage of the cycle, he or she just drop certain stages completely. Although the off-critical (high K) results of SS are not as good as those by LE, SS successfully predicts both the behaviour of the degradation index in the critical regime and the existence of a human-animal transition at finite K in the long-time limit. The exact value of Kc is then determined by the effort in the few or only component left with noteworthy accuracy.

So, the main difference between the two theories is one of incremental against linear decay. It appears that the former captures better the intricacies of student dynamics in the interesting critical limit though, understandably, an interpolation between the two may be required at higher values of K.

III. Incremental decay in a range of household activities

In this section we illuminate the workings of SS by touching upon incremental disintegration of student living standards in a variety of situations. Our schematic listing of the decay sequence can and has been reproduced by numerous experiments [8].

Dimensionality in ideal form: 5
Stages: (i) white/coloured clothes segregation (ii) washing (iii) hanging (iv) ironing (v) folding
Weakest link: Ironing
Decay sequence: Almost invariably, ironing is the first stage to be dropped from the process with folding following closely behind. The asymptotics of the degradation index is predominantly dictated by the washing process (zeroth mode) with hanging regulating the first higher-order correction, although this stage can also be dropped in favour of the much more effortless in-machine drying.

Dimensionality in ideal form: 4
Stages: (i) soaking (ii) scrubbing (iii) drying (iv) on-shelf replacement
Weakest link: On-shelf replacement
Decay sequence: A counter-intuitive outcome of studying this process is the vulnerability of the soaking stage. That is, although soaking involves a high gain-to-effort ratio it is usually set aside because of considerations of student memory spans and also the intricate discipline and synchronisation which is required in providing a proper soaking bath after late-night student meals. Again, the critical index Kc can be often calculated by including only the scrubbing stage with drying being sometimes significant but evidently not to the hungry student. Restoring dishes to the appropriate storing unit is also bypassed especially given the small number of cutlery and crockery a student would on average posses.

Dimensionality in ideal form: 4
Stages: (i) ingredient procurement (ii) pan and pot procurement (iii) cooking (iv) serving
Weakest link: Both procurement phases are equally susceptible
Decay sequence: Because of the position of the weak links in the process relative to the preparation algorithm and the abnormally low gain-to-effort ratios involved at all stages, traditional meal preparation is reserved for special events only and is swiftly scrapped in favour of frozen chicken burgers and Pot Noodles.

We have been able to show that the relaxation of student standards when left to live on their own is characterised by the incremental removal of stages in all household tasks instead of the proposed linear degradation mechanism where all stages are affected simultaneously. This is particularly true of first year students, especially Mathematics and Drama undergraduates.

It was also demonstrated that the ground state reached through the relaxation mechanism (commonly known as human-to-animal transition) is not, as previously assumed, the K=0 pigsty singularity but rather one whose K value is dictated by the least-effort stage of the respective composite process. Although we found some exceptions to this rule, namely dish washing, the general principle of SS seemed to apply well for the majority of household operations studied.